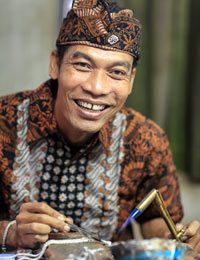 This item was created
by Wayan Sarjana

The legendary Garuda graces this bracelet with his proud visage. His double image holds a black onyx center as a symbol of the vial he rescued from the underworld. Wayan Sarjana finds inspiration in Hindu belief as he designs this cuff bracelet in sterling silver.

From the realm of Vedic mythology, Garuda has the face of an eagle and the body of a human, and when he spreads his wings he fully darkens the sky. The story goes that Garuda was once enslaved by two gargantuan underworld serpents called Nagas, When he broke free he took the magical elixir of life, called tirtha amertha which he found in a secret place guarded by the Nagas. Garuda flew directly to the heavens, and the gods became so impressed with his feat they gave him the gift of immortality. He became Vishnu’s steed, transporting the beloved deity between heaven and earth. Garuda's image is now very much revered in Bali, and frequently appears atop cremation towers in the belief he will transport the deceased's soul to the gods.