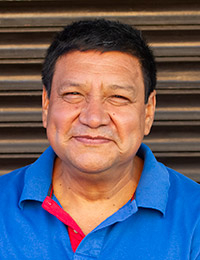 This item was created
by J. Blas

Swaying and dancing to a hypnotic tune, Kokopelli abandons himself to the rhythms of his music. His long hair blows in the breeze as he pipes a plaintive melody on his flute. J. Blas sculpts the legendary deity in elaborate detail.

Kokopelli dates back to pre-historic times; regarded as a deity, he is usually depicted with a humped back, playing a flute. Ancient legends suggest Kokopelli was a Toltec trader who traveled from central Mexico to the United States' southwestern deserts and mountains, where he is featured in the form of rock art dating thousands of years. Kokopelli played his flute to announce his arrival and according to Pueblo legends, he carried seeds, babies and blankets in his hump which he offered to the maidens he seduced.

To the Hopi, Kokopelli plays his flute to draw heat from the Earth and thus make the seeds grow. His name derives from Koko (wood) and pilau (hump). Kokopelli is believed to be present whenever life comes forth from seed – plant or animal.